Luca Della Gatta started to study circus in “Carampa” school in Madrid for one year. In this time ho got close to clown life and started to study physical theater, clown and mime in the “Nouveux Columbier” school of Madrid, directed by José Piris, direct student of Marcel Marceau. He had the chance to study with Roberto Escobar and Igon Lerchundi in their mime school in Buenos Aires and continued mime in “Accademia arti mimiche” of Turin.
Graduated in 2014 at the “Performing Arts University” of Philip Radice in Turin, Italy. He works with his clown Agro since 2010 in street shows in european main cities and international street festivals.
He worked as clown for two years at Puerto Vallarta, Mexico in the show “Rhythms of the Night” where he has the opportunity to know and work with René Bazinet. From 2019 he’s part of Collectif Primavez.

In 2019 he won the 1st Prize (Pavé D’Or) in the Festival Artistes de Rue of Vevey (Switzerland) with his show “ImproLocura“. 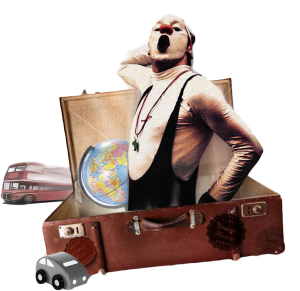